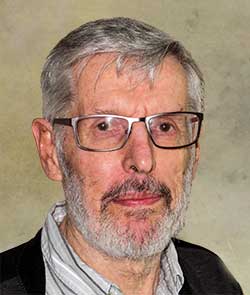 We are most grateful to Ken for permitting this outstanding display to be showcased on our website. Members will find it of great interest.

Ken was born in 1942 in Leicestershire, earned a 'double first' in Mechanical and Electrical Sciences at Cambridge before embarking on a career in electricity supply. After emigrating to Canada in 1969 he spent 35 years in research, planning and consulting.

From the 1980s his philatelic interests focussed on international postage due mail. His 2007 book UK Taxe Marks for International Mail 1875-2000; Usage and Listing is the only thorough study of these marks. For more than 20 years he has been a frequent contributor to the Postage Due Mail Study Group Journal and has also written for other journals including The British Postmark Society Quarterly Bulletin, GB Journal, Cross Post and The London Philatelist.

Since 2006 he has been the Secretary of the Philatelic Specialists Society of Canada. He has exhibited nationally and internationally but more of his energy has gone into philatelic research and writing than exhibiting.

About 2000 he started collecting and studying the UK Returned Letter Offices. Many hours have been spent in the Post Office archives uncovering the historical background to the growing collection. The results of this research was recently published by the Royal Philatelic Society London in a book The Returned Letter Offices of Great Britain to 1912 and Beyond which Ken co-authored with Bob Galland.

Now the RLO book is done Ken can turn his attention again to postage due mail. This exhibit won a Large Gold medal at a Canadian national show in October 2017.